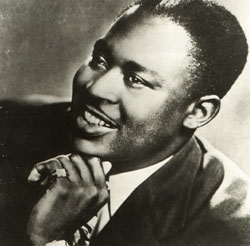 This was the first post where I was searching for the earliest rocking blues songs – songs that could be considered rock & roll as well as blues. I finally found 20 songs of this type that I have included in my book, America’s Gift. Here are my first six from three years ago.

BLUESMUSE20. Fifty eight years ago last month, Bill Hayley’s 12-bar blues, ‘Rock Around The Clock’, turned the world onto rock & roll. While many people claim Ike Turner’s ‘Rocket 88’ was the first rock & roll record in 1951, the list below says differently.

So, are these the world’s first true rock & roll releases?

3. Boogie Woogie Bugle Boy, The Andrews Sisters. 1940, Hollywood, Los Angeles. Was this prototype rock & roll? I later took this song out of the twenty earliest rock & roll songs featured in America’s Gift deciding that it wasn’t. It certainly was a form of jump blues though.

6. Rockin’ The House, Memphis Slim. 1946, Chicago.
Memphis Slim (born John Chapman in Memphis, in 1915) moved to Chicago in 1939 where he became Big Bill Broonzy’s piano player. Chapman was given the nickname ‘Memphis Slim’ by Lester Melrose in 1941 (see The White Guy Who Gave Chicago The Blues, May 2013 archive).
The songs they were recording included, ‘Grinder Man Blues’, which makes you wonder if that’s where Nick Cave got his recent band name, Grinderman, from.
Slim used his father’s name, Peter Chapman, for many of his compositions including, ‘Every Day I Have The Blues’, recorded by Ray Charles, Eric Clapton, Jimi Hendrix and a host of other blues and jazz luminaries.
As blues lost its popularity after WW2, Slim began leading a series of jump blues bands and, in Autumn 1946, recorded, ‘Rockin’ The House’, the sixth earliest rock & roll release on record. (If you know of any earlier, please let me know.) In 1960, Slim toured Europe with Willie Dixon and cut his famous London sessions, moving permanently to Paris in 1962. He died in Paris in 1988 aged 72.
Check out this great piece of early rock & roll history below. 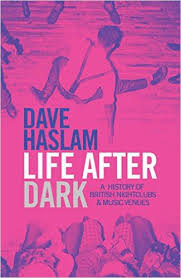 UK’s music venues down on their knees Just as I finished Dave Haslem’s entertaining new book, Life After Dark, A History of British Nightclubs and Music Venues, I read that the UK music venue and nightclub industry is on its knees. Almost half have closed in the last ten years, say the newspapers. Some 3,144 venues offered late…